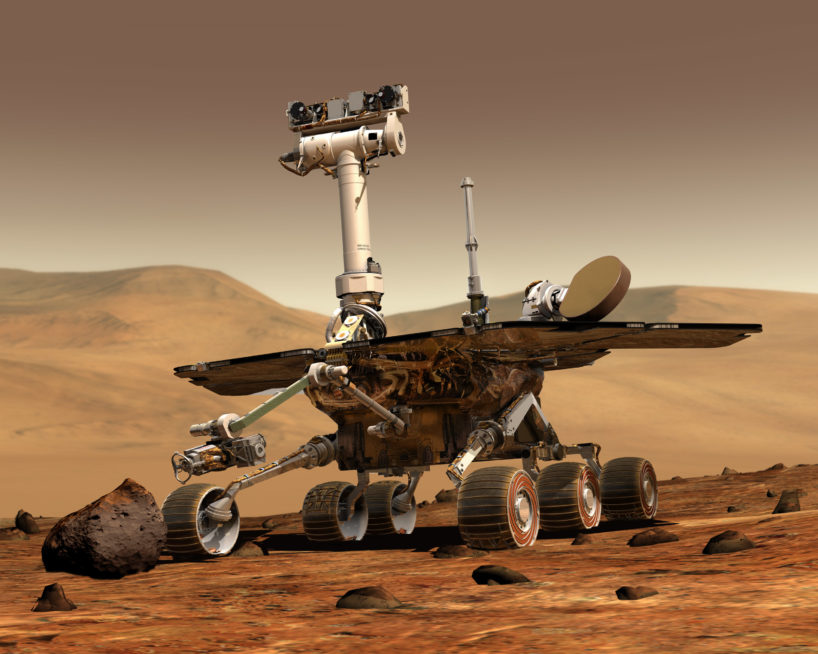 Here at Precipart, we’re proud to have played a small part in the mission, alongside the engineers, scientists, and NASA leaders who designed, engineered, and piloted the Mars rover. It’s an honor for us to share in Opportunity’s story of resilience, discovery, and wonder.

Communication with the rover stopped in June 2018 after a severe dust storm blanketed the planet, disabling Opportunity’s ability to gather solar power. Engineers in the Space Flight Operations Facility at NASA’s Jet Propulsion Laboratory (JPL), holding on to hope of restoring contact after the dust settled and solar power resumed, sent more than a thousand commands to “wake” the rover from its safe mode “nap”—but that would never happen. The rover stayed asleep and NASA ended all outreach attempts, declaring the mission officially dead.

An Odyssey of Discovery and Triumph

First designed to travel 1,100 yards (1,000 meters), Opportunity traveled more than 28 miles on the Martian surface—farther than any other extra-planetary robot— climbing slopes as steep as 32 degrees. The rover also captured 217,594 images—an exemplary feat on a planet nearly 34 million miles away—among other landmark discoveries and phenomenal accomplishments.

As of 2015, Opportunity clocked 26.2 miles—a complete marathon. On January 6, 2005 (Martian sol 339), the rover discovered Heat Shield Rock—the first meteorite of any type ever found on another planet. The mission advanced our understanding of Martian geography—which was only just beginning at the time Opportunity launched—confirming for the first time the existence of liquid water on Mars.

The most successful, enduring, and record-breaking robot to roam the Martian surface, Opportunity surpassed every expectation in endurance, scientific value, and longevity.

“It is because of trailblazing missions such as Opportunity that there will come a day when our brave astronauts walk on the surface of Mars,” said NASA Administrator Jim Bridenstine. “And when that day arrives, some portion of that first footprint will be owned by the men and women of Opportunity, and a little rover that defied the odds and did so much in the name of exploration.”

Precipart’s high precision gears and actuation systems helped power the Rock Abrasion Tool (RAT) positioned at the end of the rover’s robotic arm. The RAT weighs 720 grams (about 1.6 lbs) and uses three electric motors to drive rotating grinding teeth into the surface of a rock. The first tool of its kind to access the interiors of rocks on Mars—and about the size of a coke can—the RAT used grinding wheels of diamond dust and resin to gently abrade the surface of Martian rocks.

Acting as a virtual field geologist, the system performed hundreds of grinds, functioning for more than a decade. Throughout its trek, the RAT-powered rover changed mankind’s understanding of the Martian landscape, geology, atmosphere, and history.

A Testament to Precision and Quality

All good things must come to an end. However, the rover’s legacy—a pioneer that paved the way for the first humans to reach and even settle on Mars—will live on forever. Millions of miles from a failure, the now celebrated Mars rover mission meets its end with a sense of deep appreciation and gratitude shared by everyone who played a part.

More than anything, the trailblazing Opportunity proves everything we stand for here at Precipart: that precision and quality really do make a difference.